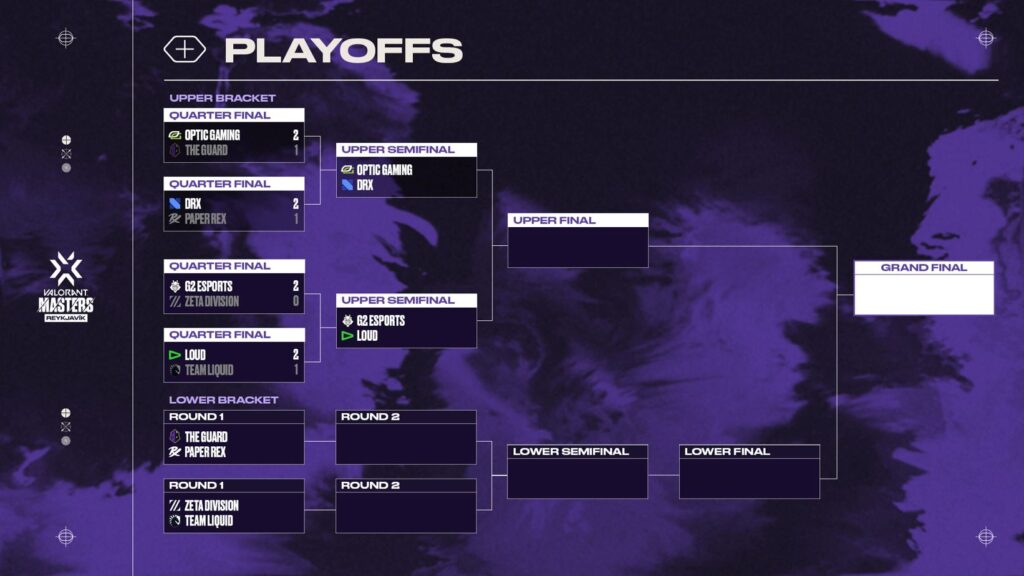 The elite 8 teams of Valorant started the week of the playoffs. Round 1 was not short on surprises. Team Liquid and the Guard were sent to the lower half of the bracket. Joining them were the sole representatives from SEA and Japan, Paper Rex and Zeta Division.

The lower bracket has paring has now been set. It will be North America Cinderella team The Guard going up against Paper Rex; Esports Giants Team Liquid vs. Zeta Division.

The first elimination match of the Valorant Masters 2022 Reykjavik is Team Liquid vs. Zeta Division. Team Liquid coming into the match up is highly favored to advance.

The first map was fracture, Team Liquid went with a Neon pick and Zeta went with an Astra. Right off the bat Zeta Division blitzed Team liquid winning 3 consecutive rounds. Things did not god as well for team liquid on their next gun round as Zeta held tight to their lead winning with timely picks and dwindling down liquid. Zeta held a massive 10-2 lead at the half and eventually winning the Map 13-7.

The second map was the total opposite of the first map. Now in Have it was Team Secret who blitzed to a 3-0. Zeta Division called a time out to gather their composure and try to break Liquid’s momentum. But Team Liquid dominated the map. The half time score line was 10-2 in Liquids Favor. Switching side also did not help Zeta Division the game ended at 13-4 for liquid.

Now we go to sudden death.

Split was the final map. Zeta Division showed that they are more comfortable in Split racing to a 4-0 lead then Liquid responded with a 3-0 run of their own. The first half was a nip and tuck affair with the teams ironically splitting the map 6-6. The second half, Zeta again raced to an 11-6 lead putting together 5 consecutive wins on back of their amazing pistol rounds. It took a Thrifty round from Liquid to give then a semblance of a comeback. But Zeta Division fought tooth and nail closing out the game and the match.

Team Liquid the one of the favorites to win the tournament was out. Zeta Division completed the upset.

Haven was the first map chosen. Paper Rex flexed their familiarity with the map racing to a 5-0 lead before The Guard took back a round. Paper Rex demonstrated amazing team work and individual plays leading to an 8-4 half time score. But The Guard was not yet done. the team mounted a comeback in the second half of the game. After falling to an 11 – 4 deficit they took their time out, The Guard rallied and won 3 consecutive round forcing a time out from Paper Rex to recompose. The Guard eventually pushed the score to 12-10 but Paper Rex was just more driven to win the map closing it out at 13-10

The Next map was split. The first half saw exciting exchanges and trades. Both teams were popping off and neither was getting the advantage. Once gain the score at half time for the second time is 6-6. After the switch of side, The Guard won the pistol round, but the advantage was short lived as Paper Rex strung together 5 consecutive rounds. The Guard was forced again to call their time out. The Guard changed their play tempo, but Paper Rex was always ready to counter. The Match won by Paper Rex 13-7.

The Cinderella run by The Guard has come to an end. Paper Rex still keeps the hope of APAC alive.