December 03, 2021, Manila Philippines – PCWORX today announced the GeForce Harbinger Tournament series,co-presented by NVIDIA and GeForce partners,  to discover the latest Valorant teams that are ready to take the next step.

The GeForce Harbinger Tournament series has a prize pool of Php 150,000.00 in cash and products. The tournament will run from December 9 all the way thru January 28, 2022. This tournament is open to all amateur and professional teams. The tournament will have a maximum of 32 teams per leg and will be a single elimination format. The first 3 rounds will be a best of 1 competition and will be played on the first day. The Semi-Finals and Finals will be a best of 3 and will be played on the second day. The teams can join as many legs as they want and there will be no restrictions on the winners as well.

This is a great opportunity for up-and-coming teams to get noticed on a bigger stage and showcase their talents.

“We always believed in the Filipino Esports athletes’ skill. We want them to develop and level up their game that is why we came up with the GeForce Harbinger Tournament Series. We want to have a platform where esports athletes can showcase their skills” was the statement made by Arnold Padilla, iCafe and Esports Manager of NVIDIA Philippines.

Each weekly tournament will feature different brand and will give out awesome prizes waiting for lucky viewers who will watch and share the stream. Amazing deals and promos coming from amazing brands Aorus, Colorful, Galax, Inno3D, MSI, Republic of Gamers, and Zotac Gaming. 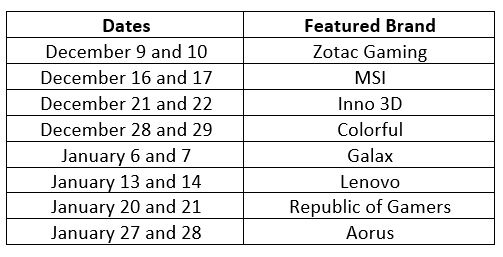